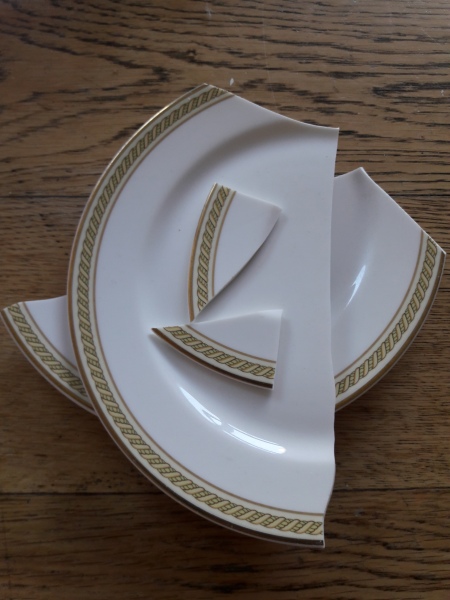 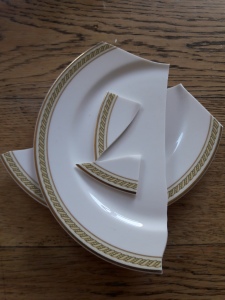 Last week, Nathan and I shared Holy Communion with two others during our church service.

Our dear friend, Matt, brought a fairly conservative chunk of bread over to serve us and carefully broke it into pieces.  One of the pieces that lay on the plate was somewhat larger than the rest.  When offered the bread, our awkward Englishness seemed to take over, and each one of us avoided taking it – I mean, that would just seem rude and greedy, right?

As we bowed our heads to pray, it began to dawn on us – this bread represents the Lord’s body, broken for us.  When we eat of the bread, it’s in remembrance of Jesus’ death on the cross in our place.  Why wouldn’t we want the largest piece?!

Nathan began to pray:  “Lord, I thank you that you don’t give us little pieces of yourself!  When you died on the cross, you gave it ALL!  You gave up everything, and gave your entire self to us!  And You said: “It is finished!”  You paid the price in full!”

It was a real moment of clarity – Jesus didn’t somehow share Himself out, giving each believer a little chunk of Himself.  No!  He gave to each one of us His all.  A real sense of holy joy came over us.

Then Matt, reaching for the wine, accidentally knocked over the communion plate, which somehow slipped through the gap in the chairs and smashed.  Rather embarrassed, Matt started to collect up the broken pieces…all but one…which I will come to later….

The sharp crack of the breaking plate, instantly reminded me of the veil in the temple being torn in two.  Was God saying something here?

My ears were drawn to the song that the worship leader was quietly strumming in the background…it was something to do with bringing our broken pieces to Jesus!  This was a God moment.

Nathan reached down to retrieve the last piece of broken china. For some reason, rather than just gathering the broken pieces into a pile, which is what I would have done, Matt and Nathan attempted to put them back together on an empty chair.  And when the last piece of china was set in its place, we were completely and utterly staggered by what we saw: 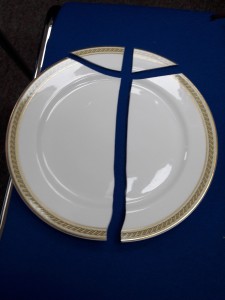 “For He was wounded for our transgressions, He was crushed for our iniquities; upon Him was the chastisement that brought us peace, and with His stripes, we are healed.” – Isaiah 53:5